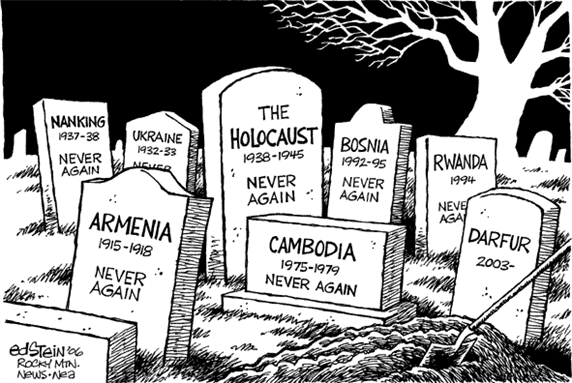 Genocide is all around us but we can stop it

If you are like most people, you probably don’t think about genocide a whole lot. In fact, when the Pew Research Center looked into it, the general, American knowledge of the Holocaust is depressing.

After World War II, there were lots of calls of, “Never Again.” The problem is the world didn’t really mean it. Bosnia. Rwanda. Darfur. All happened after World War II. Today, Genocide Watch has alerts for 20 different countries.

Moreover, companies today are still making money from genocide and other mass atrocities. Just about every company that makes athletic clothing uses cotton from the Xinjiang region of China. This is where more than one million Uyghurs have been placed in concentration camps. Let me repeat that. Today, in 2021, more than a million people are in concentration camps in China.

Head south from China and you will find yourself in Myanmar. Not only has the Muslim, Rohingya minority been persecuted for years but in February, the military arrested the recently, democratically elected government and took over the nation. Since then, military forces have killed 914 people. Meanwhile, companies like Chevron and Harry Winston (owned by Swatch) continue to do business with the military, enriching it and allowing it to continue its crimes against humanity.

What can I do about genocide?

No Business with Genocide (NBWG) is a nonprofit based in Washington, DC. It puts pressure on companies to stop funding or profiting from genocide. Its work led to Kirin Beer cutting all ties with the Myanmar military. It lobbies national, state, and local governments to pass resolutions condemning genocide and pledging not to use taxpayer dollars to fund it. Just last month, Gainesville, Florida passed such a resolution. This is also a way to educate people about the problem and to get a dialogue going.

Today, I am asking for your help.

NBWG is running a summer fundraising drive. Donations are tax-deductible. Your support will allow the organization to keep doing its important work.

PS. This is not just an issue for other countries. It can happen in the U.S., too. 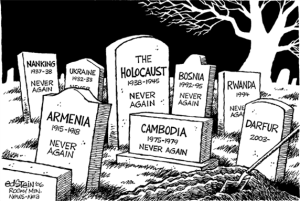 More coffee with do the trick