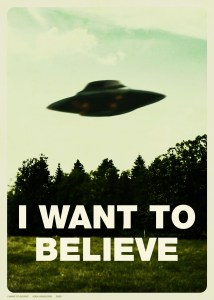 I know everyone has one so I am boring.  I have also noticed my more personal posts, even ones where I am not torturing readers with tales of my wonderful childhood (ps. I really didn’t mean to torture anyone, sorry), get more hits than my brilliant political analysis so I am going to write more.  Plus the more I write, the more I want to write (in terms of variety) so that’s a win-win for me and my stalled screenplay/sitcom pilot.

When I was packing my crap yesterday, and it is all just so much crap, I found my X-Files watch.  Yep, I was one of those people.  Now, I was not a follower from day one, nor did I refuse to go out on nights it was on (even back then we had ways to record shows when we weren’t at home).  I really actually got into it after my first presidential campaign — Clinton/Gore ’96.  Indeed, the Crypt Keeper and I are twins.  In my months of stressed-out unemployment before I went to work for RCA Victor, I stayed up late into the evening watching Fox Mulder and Dana Scully trapse around the country looking for aliens and whatnot.  It’s a good thing I am a fiscal liberal because in hindsight, that does seem like a wasteful government program if ever there was one.

It is true that I found the subject matter interesting.  It is also true that my roommate came home one afternoon and told me had his hair cut like Duchovny.  There is no connection between the two.  Just felt it should be said.  It is equally true that I had a major crush on David Duchovny.  If you have not heard the Bree Sharp song, I highly recommend it.  Now, this is partly because I read a quote of his about how his parents’ divorce impacted his view of love.  Without looking it up, I believe he said something to the effect of “It introduced the idea that love can leave and changed the way I view it.”  Now, if there was a more succinct way for me to explain my commitment phobia better, I haven’t found it.  But this isn’t about that. At the end of the day, however, I just thought he was hot.

The next year, I found myself working in NYC at RCA Victor as a publicist.  One night, I went out with some friends and played some pool and drank some beer (not a ton but enough) and when I got home, Saturday Night Live, was on.  David Duchovny was hosting.  For the record, I am no stalker and have had issues with people stalking me so  I take that very seriously but… I thought it was silly for him to be in NYC and me to be in NYC and for us to not meet.  I mean, really!  So, I pulled out a phone number for SNL that Darrell Hammond had given me (story for another day) and called it.  Darrell, they said, was on stage “saying goodnight” (it was on TV, I knew they weren’t lying) — why didn’t I just pop into the cast party?  Where is it?  I asked.  They told me.  And it was on.

My pool playing clothes weren’t gonna cut it.  Threw on a tight dress, did my hair and makeup, called a car service and I was on my way.  While the lovely woman at the entrance went to check if my name was on the guest list, two security guards asked Why are you on that side of the desk and we’re on this side?  To which I said, You tell me.   I was in.

Before 30 seconds, I saw there was a VIP area.  Of course there was.  What to do, what to do… I walked over and talked to the person there. Listen, one of my clients is in there and I just need them to know I didn’t leave without letting them know.  I am super tired and just want to go home — can you give them my card and tell them I will call on Monday?    To this day, I have no idea where that lie came from.  The woman told me she could not leave the desk and wasn’t sure she could let me in but she clearly believed me.  Lucky thing number two happened just then.  Jim Brewer was in the VIP area and he said, Don’t worry, I know her, she’s fine.  That part wasn’t a lie, we had met at several record company things in the months before this.

To recap:  In under and hour I went from a bar in Brooklyn to the VIP part of a SNL cast party.  This was clearly as far as this Icarus was going to make it.  I was fine with that so I did a few shots of what, I’ll never know.  That was a bad idea because that’s when I met David Duchovny.  Standing there, feeling Ke$ha tipsy, I felt a tap on my shoulder and a man extended his hand to shake mine:

“I believe you.”  Then I turned brain dead and went into auto-pilot.  I always have some canned response for when I meet a famous person so I can avoid saying things like, nice tie.  Instead I went with, “There are four people on earth who make me starstruck and you are one of them.”
“Who are the other three?” (For some reason, Fight Club dialogue seems appropriate here, we have just lost cabin pressure…)“Uhhh…. President Clinton, VP Gore and Hillary Clinton….” EPIC FAIL.

The conversation didn’t last too much longer than that.  I went home with my tail between my legs and couldn’t look at his picture for at least six months without wanting to vomit.  The only upside was I did tell myself that I had been an idiot in front of the one famous person I really had a crush on and the sun still managed to rise the next day, thereby giving me licence to be stupid in front of all sorts of new and exciting people.

And now, it’s just a fun story I tell.  Hope you enjoyed it.