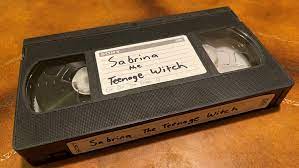 I was on my new favorite website and doing my new favorite thing (posting funny things about news items) when I came upon a batshit crazy news item. The headline was, “A woman was charged with a felony for not returning a VHS tape. She found out 21 years later.” I had a stalker who threatened to kill me and I couldn’t get the police to take a report much less send out a warrant.

Apparently, Caron McBride, who moved from Oklahoma, where the tape was rented and never returned, to Texas. When she tried to change her name after getting married, she learned she had an outstanding warrant.

McBride, was charged with felony embezzlement of rental property in Oklahoma, where she previously lived, in March 2000 — more than a year after the tape of “Sabrina the Teenage Witch” was to be returned, court records show.

Felony embezzlement? What the actual fuck? She is not alone here. In 2016, James Meyers was pulled over for a broken brake light (he was white, so he is still alive) and was told there was a warrant for his arrest. He had rented and not returned Freddy got fingered in about 2001. The charges were dropped (D’Uh) but she is suing because that is tramautic. I hope she wins truckloads of cash.

After failing to bring it back, the local video store reportedly issued a warrant for his arrest. And there it sat for the last 15 years, until Meyers was stopped on his way to bring his daughter to school. According to a video he posted online, the police officer was “courteous” and explained to him that he had a warrant out for his arrest and would need to be booked.

First of all, how in the hell does a video store have the authority to issue a warrant??? Second, how is this a good use of a cop’s time? Of course, Kayla Michelle Finley had to spend a night in jail in 2014 because she never returned Monster-In-Law. She had rented it in 2005. Her story may be the most ridiculous. Not only did she have to spend a night in jail but:

The WYFF report says Finley was at the county sheriff’s office on another matter when an active warrant for her arrest was discovered. Chief Deputy Creed Hashe told the station that the store’s owner had asked a Pickens County judge for the warrant years ago when Finley didn’t return her video.

Finley spent the night in jail because her bond hearing couldn’t be held until Friday morning. A judge released her on $2,000 bond.

She had to pay a $2,000 bond??? Judges can let people go with no bond. This was a serious enough crime to give her a bond? When did video store owners wield this much power?

I keep hearing that the police have hard jobs and that’s why they are so amped up and shoot black people all the time. My experience has been that they haven’t been at all interested when someone threatened to kill me, raped me, mugged me or just sent harassing messages. Maybe if I said, “he rented a video and never brought it back” I would have gotten some help.

More coffee with do the trick