I generally like the idea of having a spirited conversation with someone who disagrees with me. I don’t believe either side has a monopoly on being right or wrong. First of all, I think life is boring when we only talk to people who agree with us, we never learn anything. Second of all, if we cannot defend our position to someone with the opposite view, how can we really know how good of a position it is? And lastly, we need to talk to each other if we are going to work together.

The problem today is that we all come to conversations with our own ideas about what the “truth” is. Daniel Patrick Moynihan said, “You have a right to your own opinion but not your own facts.” Well, today, you are entitled to both.

Here are some of the “facts” people have told me this year:

Of course, I asked where they got these “facts.” They sent me a sundry of random blogs, websites and message boards. I tried to counter them with facts I had. None of it mattered. They asked where I got my facts and when I told them, they said, “If you are going to listen to the MSM…” At the end of the day, they told me that they thought their sources were right and mine were wrong. The argument that “they have their news and I have mine” creates a false equivalency. While, in a way, it is true, it isn’t really.

Here are the places I get my news: MSNBC, CNN, FOX News, Politico, the Washington Post, NY Times, Wall Street Journal, LA Times, the Daily Beast, NPR, BBC and others. If I read something that sounds “out there” I check more news sites. I don’t “blindly follow” anything or anyone.

Some journalists, like Chuck Todd, have called this era we are in “the post truth era.” How can we work together if we have different realities?

When it comes to the recent hacking stuff, I care because I don’t think we should let Russia get away with playing with our election. It would bother just as much if he had done this to the other side. I don’t want Russia hacking us in any way.

Donald Trump supporters don’t care. They say, “It wouldn’t have changed anything so, no harm, no foul. Let’s move on. Trump’s election was legitimate.” Move along, nothing to see here.

I honestly don’t know where we can go from here if we are going have our own facts but I do know this is a sad state of affairs. Welcome to the end of truth era. 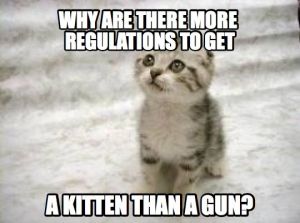 Yesterday was a good day for the Random Journal (TRJ).

I posted a piece — Chris Cillizza to host the Daily Show and tweeted the link to Chris.  He graciously retweeted it.  Within five minutes, it got 300 hits.  By the end of the day, 800 people had visited the site.  A good day, indeed.

TRJ has all kinds of satire.  My specialty is political satire but I have other writers and I also write about other topics.  Today, for instance, Grumpy Cat married Keyboard Cat.  Feline love is in the air!

If you have not checked out the site, please do.  And if you subscribe to this, please subscribe to that.  And I am interested in any feedback you have.  Really.