Congressman Paul Ryan is running for president.   I say this not because Republican insiders have told me so — and they have — but because of his “evolving” views on same sex couples. He still opposes same sex marriage but is now open to allowing gays to adopt — a change from the position he heldin 1999 when he voted against it.  You can read about that here.

To me, it’s pretty clear, 2016 will be Hillary v. Ryan.  And you may think she’ll wipe the floor with him but I am not so sure.  He’s got a lot going for him, including a decent “narrative.”  They are both Washington insiders but he’s young(er).  The Democrats count him out at their own peril. 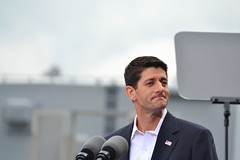 The House of Representatives voted this morning on Congressman Paul Ryan‘s budget proposal.  It passed by a vote of 221 to 207.  The 221 yeahs were all Republican, 197 Democrats and 10 Republicans voted no.   You can read the official vote count here.  Read more about the actual legislation here.

You can read my full piece on that here.