Matt Lauer was the most popular person on NBC for a time.  They recently signed a pretty 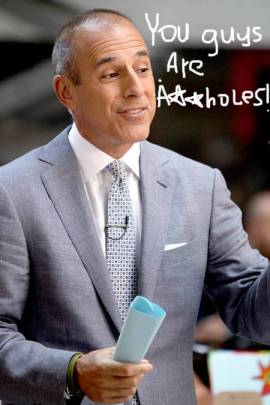 big renewal contract but now their previously popular morning show, Today, has ratings that are in the toilet.  Many have attributed that to their horrifying treatment of Ann Curry, who was the best part of the show.  (Note: I stopped watching the show, which had been my favorite for years, when Lauer and Katie Couric hosted — is that the right word? — the Thanksgiving Day parade and it was the year the network chose to not report an accident at the parade, a float crashed into something and people were injured but they showed footage from the year before.  As a journalist, Lauer has been dead to me since.)

Well, many people who are upset about Curry’s departure, blame Lauer.  They say the two did not get along. Lauer has refuted this and others have said he tried to slow or prevent the train wreck that was that.

So, why do people say NBC is trying to get a divorce from Lauer?  Well, there’s that recent interview with Jerry Sandusky that was another train wreck.  Apparently, Lauer opposed doing it but went along to be a “team player” and thinks his producers set him up.  Read that here.  And there are reports that NBC has been seeking out new talent such as Anderson Cooper, who confirmed this but told NBC he wasn’t interested.  Good for you Anderson, good for you.   (Unrelated tidbit:  I once showed my mom a photo of Cooper when he was a small child from his book and her response was “I remember taking that photo, that’s you in Golden Gate Park.”  No, mom, it’s Anderson Cooper, her “Are you sure?”  Yeah, mom, pretty sure he used photos of himself in his autobiography.)  Media experts — such as the ones on yesterday’s Reliable Sources (best Sunday show), said while it is common for networks to talk to different talent, the situation at NBC is more serious.

Boo fucking hoo.  Personally, as much as I hate the Today show and love Willie Geist — it breaks my heart that he hosts the last hour of that show and is less present on the most awesome show on TV, Morning Joe, which needs to start paying me for the number of people who now watch it but…

Rather than look to other networks for talent, look to the people you have already.  Geist would make an awesome host of any show and brings more talent than you currently feature but you are the people who forced Curry out and think Jay Leno is funny (I know his ratings are high and when my artists went on his show they sold more than when they went on David Letterman‘s show but I am a die hard Letterman fan and will be one until I die and am just annoyed by the way they treated Conan O’Brien – go team Coco!).

Bottom line advice to NBC:  Promote Willie Geist and try not be douchie for 15 minutes.  See how that works for you, you already know the opposite is a recipe for distaster.