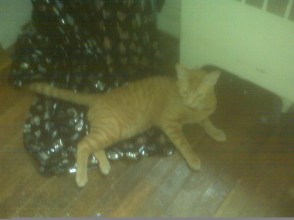 I am a cat and I can tell you, this crap is crazy.

This started as a bit of an inside joke I had with myself.  I am away for the summer and was looking at a photo of my cat, whose full name has been changed from “Cheddar Jameson” to “Little Cheddar Jameson.”

It refers, of course, to the Facebook group started to support current State Department official and aide to Secretary Hillary Clinton, Huma Abedin.  Why does she need this support?  Because the always grounded in reality Congresswoman Michele Bachmann has accused her of being under the influence of the Muslim Brotherhood.  While Little Cheddar Jameson is a cat and has never met Abedin (I have, I worked with her when I did advance for the Clintons), he would stand with her.  Even a cat can see how implausible this line of reasoning is.

And this isn’t Alyson “the liberal Democrat” talking.  This is Alyson “the I have a brain and can look at things rationally” talking.  Senator John McCain has said the same thing as had Speaker of the House John Boehner.