I predict by the end of the week we will see a statement like this from the Cain Train:

“As you know, from my repeated and vociferous denials of every doing anything wrong, inappropriate or even less than brilliant — at any point, ever — that my candidacy for president has rattled some people.  They remain desperately afraid of a black, businessman moving into the White House.  They know I can win, and neither the Democratic machine, nor some of the other GOP campaign, can let that happen.

“Both my wife, Gloria, and I remain convinced that Herman Cain is exactly what the doctor ordered to lead this great country at this time in history.  While the persistent rumors and allegations about me don’t bother me at all, as I know they are not true, the toll they are taking on my wife is another story.  I don’t want to give in to these fear mongerers and mud slingers but after meeting with the joint chiefs of my campaign, we determined these attacks will keep coming so I am ending my current campaign for the GOP nomination.

“Herman Cain will be back.  Maybe as soon as next year — I will base my decision to run as an Independent on whether I can get Donald Trump to run with me.  If that doesn’t work out, he is unpredictable and not nearly the handsome rascal Rick Perry is — or that I am — this is not the last presidential run for the Cain Train.

“Thank you for your support, God bless you, God bless America and God bless Godfather’s Pizza.” 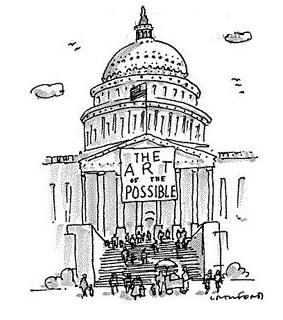 I complain about Washington, DC. The DC Metro sucks. The infrastructure is falling to pieces. The state of what we call political discourse makes me want to poke my own eyes out. Oh, and had to go to the CVS and some creepy, smelly guy stood way too close to me and was growling. Dude, can’t a girl get some space? Last point, we had a scary earthquake and now a crazy hurricane is coming our way. What next? Frogs? Locusts? Glenn Beck will hold another crazy fest on the mall and his minions will take over my favorite coffee place and I’ll have to get my caffeine at the totally ghetto Starbucks that frequently runs out of coffee?

And then, just when I think the best plan is to move to a farm in Wyoming, something spectacular happens; I look at the Capitol Building and all that negativity just vanishes. I remain in awe of the amazing thing we have created here. When we tear each other down by attacking each other’s patriotism or motives, we don’t just hurt our political opponents but we diminish our creation and ourselves.
My entree into this glorious world of campaigns and politics happened when I was eight. Funny story: I was at the Hawk n’ Dove waiting for a friend and the manager, Paul, asked me about this. I replied that I had started by volunteering to unseat the evil Conservative Party (not GOP, mind you, but Conservative) from the first district of New York — Bill Carney. The man next to me said, “That’s me.” — He proved it by showing me his Congressional ID. Open mouth, insert foot. We are now friends.

When I was eight, I canvassed, I handed out flyers, I stuffed envelopes. On election night as we watched the returns, the areas I canvassed had a higher turnout for our candidate, George Hochbrukner (a hard name to spell but a great one to remember!) than other areas and I was sure that was because of my hard work. He lost. He lost the next election and was elected to Congress only when Bill retired. He quit when he could no longer go for a beer and have a conversation with his opponent. It wasn’t fun anymore. He thinks civility in this business is a pipe dream.

I don’t believe that. When I worked in the Senate, I felt a bond with all over staffers. We all were there, working crazy hours for next to no pay because we believed we could make a difference. The real difference between the two parties is not that one is more patriotic than they other or believes more in God. We all want to get to the same place, we just have different paths to get there.

I read on Conservapedia that Jefferson Smith from “Mr. Smith goes to Washington” was a Democrat. They also see it as demonizing Republicans. I don’t believe that. I refuse to believe that this movie was a partisan statement. It was a call to remember that politics really is the art of the possible.

No, I am not a member of the Tea Party.  I am not a conspiracy theorist.   Occam’s Razor could be tattooed on my forehead.  I think Lee Harvey Oswald acted alone and we went to the moon.  Anyway, you get the point.

In late 2008, I was working as a freelance writer/PR person.  For a very brief period I wrote for a Sunday morning, political round table television show (won’t say which one but the host is super obnoxious and, for once, I am not talking about David Gregory — hint two: it’s also not Chris Matthews, whom I have never met).

In one morning meeting the host told us (there were two writers and the host in the room) what he wanted the theme of the next show to be.  They then recanted a tale of political intrigue that defied logic.  The then President-elect was planning go go back to Hawaii to retrieve his real birth certificate from Kenya that was cleverly hidden under the left, third drawer of his grandmother’s study (seriously, how would that detail get out?).  The host went on to explain the people who had been hired, sometime earlier in the President’s life, to cover up his real birth place and forge a new birth certificate, which is the one that was released.

To me, this story was/is/will forever be, absurd beyond belief.  My first reaction was to laugh really hard and I said, “THAT’s the story your’re going with?  Really?”  I also pointed out how absurd that was. Being really new to writing for TV, this was probably not my best plan and the host’s reaction backed me up on  that point.  They back peddled a bit and then said, “I didn’t say it was true, I just said people are saying this.”  Right.  I am not saying he’s a liar, I am just saying other people are.”

In a subsequent conversation, we had a back and forth that went like this:

Host, “You, you are obsessed with Obama!”

Host: “Obama fatigue, where did you get that?”

Host: “I cannot figure you out.”

There would be few more of these pleasant exchanges as soon after, I was informed my services would no longer be needed at the program.

I am not saying I was fired for not supporting this birther nonsense.  I am just saying some people are.

(Note:  I am a Obama supporter.  I voted for him in 2008 and will do so again in 2012.  On the morning of the above conversation, I had seen two disturbing pieces of memorabilia — a toilet seat with the First Family on it and some sort of random OTC medication that claimed to be “Obama’s favorite.”  My fatigue was more attributable to that than any thoughts I had about the now President.)