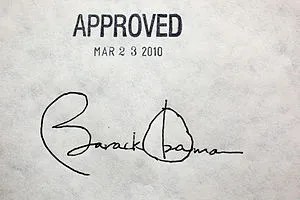 On the second anniversary of  the Affordable Care Act, I am reminded of a conversation I had with a reporter from The Daily Caller who likened the legislation to something from Nazi Germany (seriously).  He went on to say that no insurance company had ever dropped anyone for becoming ill.  He challenged me to find someone this happened to.

As luck would have it, I didn’t have to look very far because it happened to me.

In 2003, I left my job to go back to school.  For some reason I didn’t think I could get Georgetown University’s student plan for the summer session so I bought my own personal plan.  In the fall, I had planned to cancel the personal plan and just go with the student insurance but I forgot to cancel it and had both.  The effective enrollment date of this plan was June 1, 2003.  (It was a good thing that I kept both because a decent chunk of my care was received when I was not eligible for the student insurance.)

Prior to 2003, I had been pretty healthy.  I have always been a bit anemic but I used to donate blood and platelets on a regular basis.  My only real complaint was my knees, which suck and both have been operated on.

In November 2003, I started feeling really crappy.  I was taking organic chemistry and physics.  I was terrified of physics and orgo is just hellish (though it is the best class, in retrospect, that I have ever taken, it really improved the way I process information and every college student should have to take it).  My symptoms were stomach pain and nausea, things I could easily dismiss as being related to the course material and all the coffee I was drinking.  I am very good at ignoring things I do not want to deal with.

By mid-December, I could not ignore it anymore because I started throwing up blood.  A lot of it.  When I was seen at the GTown ER, they put in a naso-gastric (NG) tube to flush out my stomach to determine if there was any active bleeding but were pretty sure there would not be.  They were wrong. They found a bleeding ulcer which kept me there for the next week.

Over the next few months, the ulcer did not respond to treatment.  At least not in a good way.   It was growing and by late winter it was one of the biggest they had ever seen at Georgetown Hospital  (Go big or go home as I always say).  They recommended surgery to remove it.  So I had laproscopic surgery to remove just the ulcer.

A few days after I got home from that operation, I became really sick.  Had a high fever and was back in the ER.  An infection had developed and I needed a drain inserted.  (Side note: my insurance did not want to pay for the anesthesia used to insert said drain until I described, in as much gruesome detail as I could come up with, the procedure and then they did pay.)  Spent another week in the hospital.

Several weeks after that, a blockage formed and I couldn’t eat anything so back to the hospital I went.  My only option was an open partial gastrectomy.  This was much more invasive and serious a surgery than the first.  They removed the bottom (distal) third of my stomach.  This is called a Billroth II.

The next phase of my medical drama is at least partially my fault.  If you ever have major surgery, give yourself more than two weeks (once you are home) to go work on a national, political campaign.  You’ll thank me later.  I ended up in the cardiac care units of two different hospitals that summer.  That was because my healing stomach was still bleeding.

Meanwhile, back at the ranch, my personal health insurance had stopped paying.  By this time, the tab for my care for 2004 hovered around $450,000.  They were claiming this was a pre-existing condition and refusing to pay for any claims that had been submitted and any that were coming in.  My coverage had been pretty much suspended and I advised against going to the doctor until this was resolved.  In this area, I was lucky because I didn’t need to for a few months but things could have easily gone the other way.  It took several months but they finally agreed that this was not “pre-existing.”

Note:  It may be worthwhile to treat medical records like a credit score of sorts.  I had trouble getting Georgetown Hospital to send my records to the insurance company — there were hundreds, if not thousands, of pages of them.  When I went through them I found an injury I never had (one of the few!).  On on ER visit, subsequent to all of this, the nurse who triaged me asked me if a certain physician was my doctor.  When I told her I had no idea who that was, she replied “He delivered your twins.”  She really thought I was out of my mind until I told her I didn’t have any children.

In a sense, that reporter was right.  Insurance companies don’t come out and say, “We’re dropping you because you are sick.”  They do, decide to call something pre-existing, and it doesn’t have to be for them to call it that and get away with it — at least until now.

I wrote this detailed account of my medical problems to show how rapidly things can go very wrong.  As I stated, I was healthy when I purchased the private insurance.   I was working out at least five times a week.

The United States stands alone in a number of areas.  Our approach to health care incentivizes costs, not care.  Moreover, while we pride ourselves of having the best system in the world, if we prevent access to it, what good is it?   Dr. Atul Gawande wrote an excellent piece for the New Yorker on the current status of our health care system.  You can read that here.  We are also exceptional in terms of how bankruptcies caused by medical bills.  That isn’t a problem in other countries but is huge here.  In economic times like these, far too many of us are one emergency away from bankruptcy.  That is unacceptable.

Personally, I think we need to do more with health care reform.  We need a single payer system.  I do not, however, think “Obamacare” is a vast overreach by the federal government.  I think it is a good start.