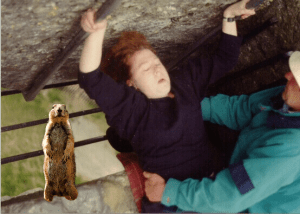 This is me kissing the Blarney Stone. When one kisses it they are given the “gift of gab.” Yeah, until recently, I had that. Oh, and that’s the crasher squirrel with me.

My recent brain issue has caused me a lot of trouble communicating.  As this is not only my favorite thing to do — communicate I mean, I write, I talk (a lot), I read — this has been troubling.  Along with the memory problems, nothing has scared me more than waking up unable to talk or write.

I feel like one of the patients on that show, Mystery Diagnosis.  People on that show have baffling symptoms that force them to go to multiple doctors before, sometime decades after the first symptom appeared, they are cured.  Usually really bad symptoms are prefaced with “Nothing could have prepared them for what happened next…”  My life has felt a lot like that lately.  First, it was seizures, then the realization they had been happening longer than I had thought and may be the cause of other problems (memory, speaking, writing), then I started having massive headaches that started in the morning (when I was asleep) and gradually faded during the day, then it was visual problems (only my left eye but it can be nearly impossible to see out of it when it is bad) … Every day was starting to make me worry about what troubling new thing would happen next.

I don’t know if it is a symptom of whatever is going wrong in my brain or the stress of this all but nothing could have prepared me for what happened the other day.  (You don’t know this because you cannot see me but I mean that in a little tongue in cheek kind of way, that’s what people in comedy call a ‘call back.’)

My cat — Little Cheddar Jameson — is a stressed out feline.  He gets very upset with the mirrors or other reflective surfaces in my apartment and has taken to waking me up between three and six in the morning fighting with one in my bedroom.  I have taken to responding by yelling at him.  The other day was no different only when I yelled at him to stop I yelled, “Tu es de la merde!  Tais-toi!  Je doit dormir!”  This didn’t seem odd until I went to fall back asleep and all of my thoughts were in French and I could not think of any English words.  Not a single one.

Now, one of my next thoughts was that I really need to work on my French vocabulary because it has been a while and mine is pretty limited right now.  I resolved to practice it more.  And I will.

Eventually, I fell back asleep and when I woke up, things were back to normal but that was very, very strange.  So now, if you run into me on the street and I am either very quiet or speak only in French, you know why.