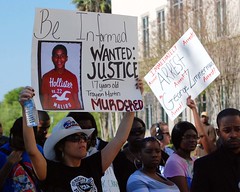 Personally, I think David Brooks had it right on Meet the Press this week.  We need to talk about race for sure but we need to broaden that a bit.  We need to talk about how we all view each other.  More to the point, how we view people who we perceive as being different from us.  That feels like a really obvious statement but sometimes we miss the things that are the most simple.

I am going to talk about some things that may or may not seem related.

One of my passions is stopping and preventing genocide.  I also have intractable insomnia.  The extra free time the latter gave me the chance recently to reread the book Machete Season; the killers of Rwanda speak.  If you are unfamiliar with it, it is a series of interviews with some of the perpetrators of the Rwandan genocide.  Now, I will set aside for a moment my complete horror at the fact that they seem to sleep like babies whereas I can go weeks without sleep (yes, people who butchered their neighbors and friends with machetes sleep better than me).  The main thing that sets genocides in motion is the ability to look at people of a perceived different culture as bad.

Closer to home the things that come mind for me are the shooting of Amadou Diallo, a man shot 41 times because when the police asked for his ID he went to get it out of his pocket.  I was living in New York City when that happened and I am not going to lie, that made me fear the police  Rudy Guiliani may have become “America’s mayor” on 9/11 but when I lived in his NYC, police brutality had gone up by a whopping 30 percent and his administration’s response was basically “shit happens.”  Ok, he didn’t say that exactly.  After one instance where the police burst down the wrong door (because they wrote the address down wrong), his response was that if you want less crime, you have to expect this sort of thing.  There was no apology for scaring the crap out of an innocent family.

These attitudes trickle down.  Maybe Ronald Reagan had a point, there is such a thing as trickle down bigotry.

The Trayvon Martin case could not have a clearer racial overtone than the killing of Matthew Sheppard was homophobic.  But our prejudices extend beyond that — we judge others based on their religion, culture, weight, gender — anything we can use to classify someone as different.  This sets the stage for violence on the micro and macro level and it needs to stop (I know you knew that).

Brooks mentioned a great project.  It’s called the Implicit Project.  They have several tests on there where you can measure your attitudes towards people based on a number of criteria.  It takes a few minutes and is well worth your time.  I did a few.  I will post my results if you post yours.  Go here to complete them.