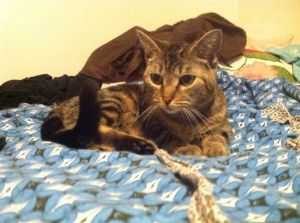 Well, I should have written this sooner but if you follow me on Facebook, you know that Squirrel came home not too long ago.  She was skinny and scared but otherwise ok.  The woman who was caring for her (and lost her) woke up after a nap to find my cat snuggling her and thought, “This cat is way more affectionate than my cats!”  That’s my little Squirrel.  The picture on the right was taken right after we got home.

The bad news is that Hobbes remains MIA.  Still check the shelters and websites and the neighbors know to look for an orange tabby.  My only real hope is that he will do what Squirrel did, get cold a 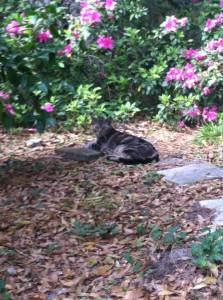 nd come back.  He was much fatter than she is and a better hunter so maybe it’s just taking him longer to get to the point where he has to come back.  I am not totally delusional so I get that is a long shot but so was getting Squirrel back so there you have it.

The photo on the left is Squirrel in the back yard.  She is still a little scared and a little skinny but getting back to normal.

And we both ask that you check out the Random Journal.  Seriously.

Oh, so that's liquid nitrogen pouring on me, then?

Certain events this week have me thinking about college.  And, don’t worry, this is a personal post but nothing sad or depressing.  I am not sure how interesting this will be to anyone who wasn’t there but I hope it makes you laugh, Ali.

The various pictures are all from the site: www.stonytbrooksucks.com and are undoctored photos from around campus.

I was back at Stony Brook for homecoming last fall — which was my first Stony Brook homecoming ever, I didn’t even go when I went there.  A lot has changed.  The bridge to nowhere is gone, which makes me sad.

Stony Brook University is supposed to be known as one of the best SUNY schools and have excellent science and engineering departments.  Yet the following statements are all true:

Next up: dumb things I did: 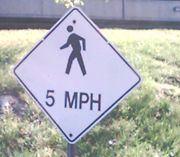 These are the things that should comfort me whenever I think it is early senility or my most recent head injury causing me to forget something (like the time recently I ran into get my checkbook and ran out with my remote control).  I should take heart; I was always this absent minded.  When we were roommates (side note: my name is Alyson, my roommate’s name was Alison and one of my best college friend’s name was Allison, you can imagine how interesting that made things), I thought our outgoing dorm voicemail should be one of those “I am sorry, can you please speak up…?” deals, so I recorded one.  My idea and my voice and yet it still managed to fool me at least five times.  All of the roommates (we were in a six person suite), thought it was hilarious that I set my alarm clock ahead by several minutes to trick myself.  A few joked they were going to change it to screw with me more and one did — rather than being 15 minutes ahead it was somewhere in the range of 90.  For more than a semester I showed up everywhere more than an hour early. (In my defense, that was only mornings when I had something early.  Against me, I was in the student government that year and clearly, no job on earth carries the importance of that, so I did go into “my office” pretty early most days.)

Remember Gina’s ‘heap of hope?’ (Gina was not the most tidy suitemate and had a pile roughly the size of Everest on her bed.)  Yes, that remote control we lost for several months was in there.

How about Misha the cat from hell? Or how she kept leaping from the balcony?  Or how we had to hide the cats in the shower when they did room inspections?  Or Randi’s birds that shit everywhere.

Not sure why, but back in college I liked to walk around singing the Ivory Soap commercial.  Not kidding.  One day I was in some building on campus and ran into Iowa (another suitemate) singing it.  She swore me to promise never to tell anyone but I think the statute of limitations has run its course on that one.

Anyway, when I went back, there were a lot of changes.  I don’t know what this says about me — maybe nothing, the olfactory system is supposedly one of the most closely connected to memory — but when I walked down the stairs of the union building it was as if not a moment had passed since you and I were there.  The smell brought it all back: The Rainy Night House, that student government scandal my campaign nearly caused (ironic and sad) and how lucky I am that we were roommates. 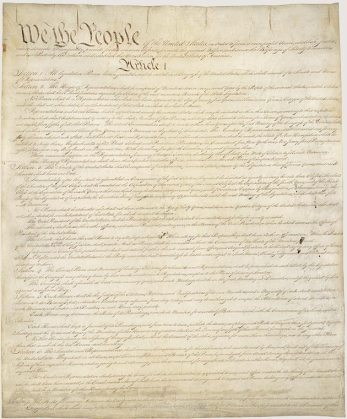