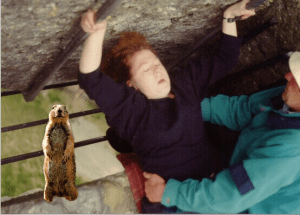 Erin go bragh!  I know, I know everyone is Irish on St. Patty’s Day.  Despite my red hair, freckles and ridiculously pale skin, I don’t have all that much Irish in me.  That doesn’t stop people from assuming I am in the US straight off the boat (or I guess plane) from the emerald isle. Being that time of year, I thought I would share some of my favorite anecdotes about this.

The most notable person to assume I was Irish was Paddy Maloney of the Chieftains.  My first real job in public relations was at a publicist at RCA Victor.  I handled their world music and jazz department and that meant the Chieftains fell under my area.  As their record label publicist, I accompanied them to the Grammy Awards.

Side note: Paddy and I were back stage and attempting to get him back to his seat.  This was 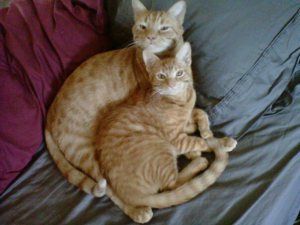 the first time I had met him and didn’t want to look like an idiot but we were stage right and I had only walked from back stage to the house on the stage left side and got a bit turned around.  A stage manager approached me and told me I was in a restricted area so, of course, I told him to fuck off, I am with a performer and he needs to go where he needs to go!  Well, I walked the way I wanted to and we got where we needed to get but not before we walked on stage (during the broadcast) and were briefly on TV.  Guess that’s why the stage manager was being so prickly!  Live and learn…

At the after party, or one of them, I was talking to Paddy and his wife and he commented that he thought I was from Ireland.  I responded it was just the red hair and blue eyes but he said, No, I thought you had a brogue.  (I asked his wide, how much has he had to drink?)  I have many things but an Irish brogue is not one of them.

Most memorable mistake:  I was in Mexico doing an official trip for President Clinton.  When we arrived in the country we were told to hold on to a form they gave us.  This meant I probably ate or shredded it immediately and did not have it two weeks later when I wanted to go home.  Now, I had been very sick in Mexico.  You know, Montezuma and all.  When the time came to return to the states, I was more than ready but was denied boarding because I did not have that form.  I started to cry — and I don’t mean a tear or two, I mean full on sobbing.  The woman at the gate  tried to be comforting — and while she was holding my passport, complete with the statement that the bearer is abroad on an official assignment for the US government, we had this exchange:

There are some benefits to this misidentification.  No one ever thinks I am from the US when I travel (for the record, saying you’re Canadian does nothing to help you, despite what people think.  If someone wants to do Americans harm, well, those people view Canada — sorry Canada, as the 51st American state so don’t bother).  If I don’t get Irish, I get English.  This can have its own set of problems as when I was living in Paris someone got mad at me for using a phone booth.  I was on the line with a friend in NY and he screamed, Go back to Britain you English bitch! at me.  Huh?  Usually, I wait until I know people like me to let them know where I am really from.  So, if they think I am a total bitch, they can keep thinking I am from Ireland or England or whatever…

Most intriguing experience with this…  Two red heads go into a bar and…  My friend, Maureen, and i went into a pub in Dublin.  She and I have identical coloring but we were approached by a local and this exchange took place:

I don’t know why he said that or if he thought it at all but she was really angry with me.

By now you probably know that people in every state in the country have started petitions to secede from the United States.  First of all, good luck with that.  How often has that worked before?  Oh, right, never.

Secondly, you might want to think a bit before you go ahead and start your own country.  Personally, I like having the US military there to protect me.  Maybe you do, too but whereas I will still have it, you would not.  Think your former country is going to bail you out when some big bad comes knocking on your door?  Think again.

And while we’re at it, I like being able to travel the world with full protection of the US government behind me.  Get stuck in some foreign country and need help, yeah, there’s an embassy not too far away.  Not so much for the newly created Republic of Alabama.

Oh, and to senior citizens in states looking to leave, hope you don’t need that Medicare or Social Security because you won’t be taking it with you.  And Florida, that’s going to impact a lot of your residents.  Texas, too but you’ll be smarting from all the people you have lured away from their states racing home to keep their US citizenship.  Funny, your governor doesn’t seem all that excited about the possibility of giving up all that federal aid you get.

Aside from all of that, this is really absurd.  Part of the deal of our kind of government remains that not everyone will be happy with the outcome of every election.  In some ways, that means we are doing something right. You know where nearly 100 percent of people vote for one candidate over the other?  Places like North Korea.

Personally, I have lived through many elections where I wasn’t happy. I had threatened to move to Canada if George W. Bush was elected but I didn’t go anywhere.  After working on the Gore campaign, I was pretty bitter about the outcome of that race but I didn’t think the state I lived in (New York) should become the nation of New York.  But I wasn’t the whiny bitch you people seem to be.  Seriously, this stuff annoys the crap out of me.

I actually agree with this:

“When in the Course of human events, it becomes necessary for one people to dissolve the political bands which have connected them with another, and to assume among the powers of the earth, the separate and equal station to which the Laws of Nature and of Nature’s God entitle them, a decent respect to the opinions of mankind requires that they should declare the causes which impel them to the separation.”

This, however, is not one of those times.