I am not going to lie, I was never a big fan of either of you when you were in Congress. In fact, I wrote this about Mr. Ryan’s budget in 2013. The caveat to this is that while I didn’t agree with you, I didn’t ever think either of you was bat shit crazy. Neither of you was the “burn it all down and screw anyone who gets in your way” kind of person that is Newt Gingrich.

Both of you are in an interesting position. No one can really attack your conservative bona fides (though followers of Qanon will). Sane people respect you. If either of you come out against President Donald Trump, you will boost your reputations and give yourself a good platform to return to public life. You both will look like leaders who put the country before party. That’s powerful stuff right there.

Trump did nothing when he learned Russian President Vladimir Putin has been paying the Taliban to kill American soldiers. Let that sink in for a minute. Rather than confront Putin, he tried to get Russia readmitted to the G-7. Trump has kissed Putin’s ring for the entire time he has been in the White House (and long before that). While Trump’s “excuse” has been that no one told him, reports say that he was briefed in early 2019. It is common knowledge by now that the Donald is not a big reader (he rares looks at the Presidential Daily Briefings he gets) but John Bolton told colleagues that the briefing was in person. One of the most serious jobs a president has is keeping Ameican troops safe. If there was a grade worse than F, he would get it here. That alone should be enough to denounce him but there’s more.

Trump’s incompetence has killed tens of thousands of Americans. As of today, more than 130,000 Americans have been killed by Covid-19. No, Trump did not create the virus but he did fire the pandemic team that was part of the National Security Council. He also threw away the pandemic response plan that the Obama team left for him. If that wasn’t bad enough, he called the whole thing a “hoax” for two months. Today, you can see how that has impacted people as Trump supporters don’t wear masks and non-Trumpers do. This shouldn’t be a political thing. Now, other Republican leaders are telling people to wear masks. Some reports say that if we took this more seriously and actually did something sooner, between 80 to 90 percent of the people who died from Covid-19 would still be alive. Remember, he was warned about this in January 2020. Let that settle in.

Trump is stoking the flames of racial discord and division across the United States. Our nation is at a precarious point. Americans of all races have finally had enough of innocent black people being killed by police or vigilantes. As the nation comes to grips with its original sin of slavery, what does the president do? He goes on the offense.

First, he tried to use the U.S. military to break up peaceful protests in Washington, DC. When he was included in a photo op in front of the church on the other side of LaFayette park from the White House, General Mark. A Kelly, chairman of the Joints Chiefs of Staff, apologize saying “I should not have been there. My presence in that moment and in that environment created a perception of the military involved in domestic politics.”

Now, he has been giving speeches defending Confederate heroes. First, he was at Mount Rushmore and then the White House. No one has ever claimed Trump is a constitutional or history scholar but this is just more proof that the only Ameican he cares about is himself.

That is just a summary of a few of the things he has done in 2019 and 2020. This list is not exhaustive or complete. If not caring about our soldiers in a war zone or people at home who are vulnerable to a deadly disease or thinking promoting a race war and thinking it is ok to use the most powerful military in the world to quell protests is not enough to make you see how dangerous Trump is to us and the world, I don’t think anything will.

Mr. Boeher and Mr. Ryan, we need your input

Mr. Boehner, from what I had read, you are pretty happy away from the spotlight. I am happy for you, truly. That also means you are not in a position to have to worry about reelection. What do you care if Trump tweets something mean? That may be what passes for a merit badge in 2020. You have nothing to lose and a lot to gain. When the rest of the party catches up to you, which they will, you will look like a real leader.

And Mr. Ryan, you are too young to be out of the game for good. Your previous statements about Trump and how you felt after the Access Hollywood tape give you somewhat of a foundation. We need to find a way back to a place where the Republicans and Democrats can talk to each other again. This tribalism, into which we have devolved, helps no one. You know that. I know you do.

Help us, Mr. Boehner and Ryan. Your country needs you.

Here’s a song about another politician who had to make such a decision. 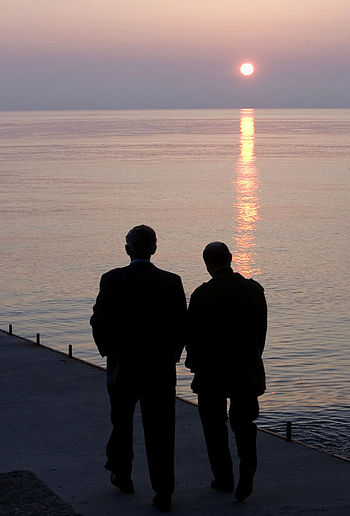 When something is thrown upwards, there is a point at which the object’s upward momentum and the force of gravity are equal. For some time period — even if it is incredibly small — when the object hangs suspended. That is the emotional space I have occupied since learning about Osama bin Laden’s death. Any relief/closure/positive emotion has been tempered by my normal instinct that death is bad and deaths, even of bad people, are not meant to be celebrated.

Now, I should confess a few things. I grew up on Long Island and live in Washington, DC. My emotional location vis-à-vis 9/11 had been a strange place. It remains one of the worst days of my life and few things would make me happier than seeing the towers built back exactly the way there were and despite knowing New York as well as I know any place on earth, I still get lost in lower Manhattan sometimes because I still look for the WTC when I get out of the subway. Growing up, that was my compass in the city. It may always be. These are the reasons, my liberal friends tell me my opinion of anything 9/11 related is less valid because I am too close to it.

At the same time, I will never think we should do to ourselves what the terrorists could not; destroy out way of life and take away our belief in the ideals that inspired our republic. Racial intolerance cannot be mistaken for vigilance against terrorism. We cannot convince anyone outside of the US  to believe that we believe in the importance of the rule of law if we do not apply it uniformly within the US. And the Bill of Rights is as important today as it was on 9/10/2001. These are the reasons my conservative friends tell me my opinions on this subject are less valid because I “do not understand the impact 9/11 had on America.”

You can see the paradox. One might think these opinions would give me more reason to hate Osama bin Laden but I don’t. I can’t. He doesn’t deserve that. The closest thing I have had to “joy” at seeing him be killed was when I laughed at a photo of President Obama that had the caption “I am sorry it took me so long to get you my birth certificate, I was busy killing Osama bin Laden.”

At the end of the day though, if I were to become the kind of person who celebrates any loss of life — even of someone as reprehensible as this mass killer — I just become more like them and I don’t want that.