Just when I was starting to get worried that season five of Jersey Shore is still a full six months away — how will I get through this rough time? — the GOP presidential candidates have come through.  I am not sure if this qualifies as a real progression from reality TV 1.0 to 2.0 but we have entered a new phase, that’s for sure. 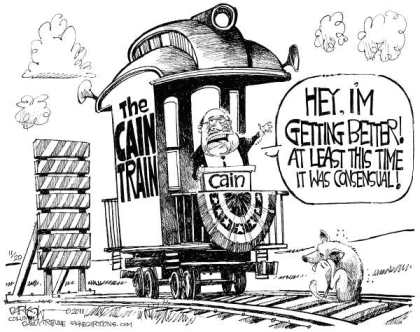 For instance, Herman Cain is the newest gift that keeps on giving.  My personal issue with him isn’t his 13 year affair, the allegations of sexual harassment — although they are deplorable, or even his positions on policy.  Granted, the last in that list disqualified him immediately from being someone who would get my vote but he already knew that (did everyone catch him tell a reporter than he “doesn’t need 100 percent of the vote” ???). My real problem with Cain is that he thought he was qualified to run for president without doing even the slightest real prep for  it.  If he cannot read enough to know the issues — or even be able to accurately describe his own ideas, how could he ever govern?  I find it beyond arrogant that he thinks he can govern solely on the strength of his personality.  I met a candidate for the US Senate a few years ago who had never worked on a campaign or in government.  He volunteered on one in college.  He called the move to the US Senate a “lateral move.”  No, sir, it is not.

Campaigns are long job interviews.  If a job applicant answered any interview question with “I will listen to my advisors on that,” they would be laughed out of the interview.  Worse, they would have wasted the interviewers time.  That’s what bothers me about Herman Cain.  The farce of his campaign has hurt the level of discourse and wasted all of our time.

Having said all of that, I have found his train wreck campaign to be as delicious as any of Snooki’s adventures.  And I kind of love it that he is the last person in America to realize his campaign is over.  Love it.

Why so angry, white people?

Donald Trump is a fascist pussy