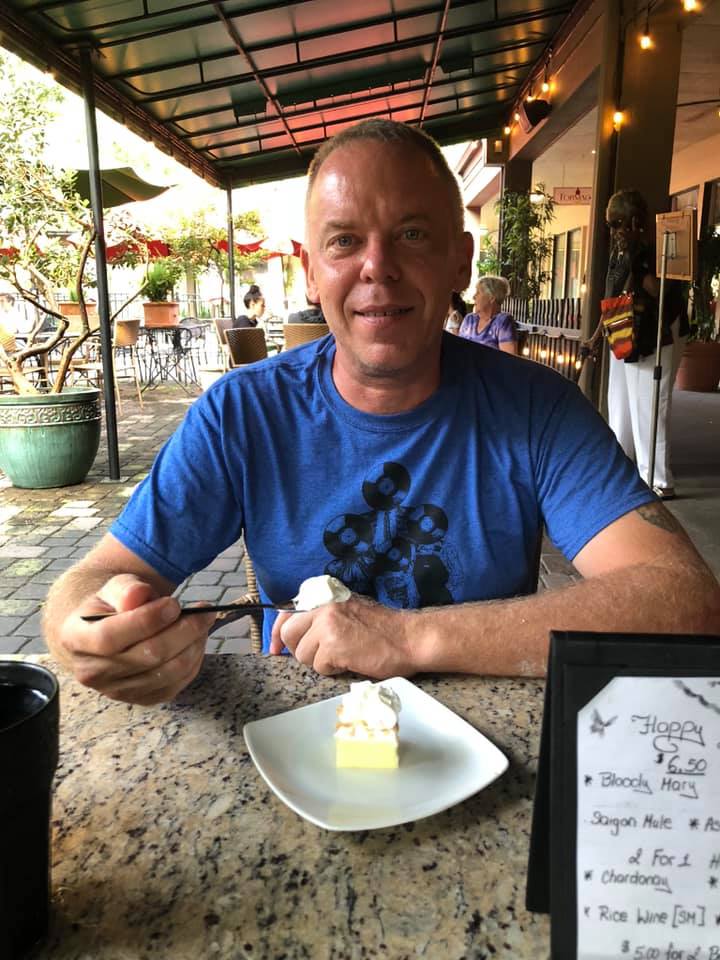 That’s my friend, James Thompson. I met him when I was living in Gainesville, Florida. Yesterday, I learned that he killed himself earlier in the week. Just before I read about this tragedy, Harvey Ward posted on Facebook about men and suicide. This is unbelievably sad. I wish I could have done something. It felt so random to read of his passing.

This is what Jeremiah Tattersall told the Gainesville Sun:

“He was a very, very kind man. There are very few things that happened progressively in Alachua County that didn’t at least have his fingerprints, often behind the scenes,” Tattersall said. “It was always great to talk with him. We would start talking about something small, like the school board and the unions, for maybe 20 minutes and then talk another two hours about art, life, children, friends. It was also like that with him.”

James also wrote this piece in the Iguana.

It’s hard to think that James was suffering. I am comforted by the fact that he was surrounded by people who did care about him. That might seem strange, given how things turned out but it goes to show how little we know about what’s happening with the people around us. I can be in a crowd of people and feel totally alone.

I also understand, more than I would like, the thought process he may have been experiencing. I have struggled with depression and anxiety and have had thought that I am not going to explain now. I just hope if anyone reading this ever feels they aren’t worth much (as I have felt) or that they need help, I am always here.

This has actually been a tough week for me. Not so much emotionally but physically. I went in for an upper endoscopy (EGD) on Monday and while the procedure itself went fine, it takes about ten to 15 minutes, the experience was harrowing. It felt random the way I experienced this test, which I had had before.

The problem, as it always is, was getting the IV in. I always tell the nurses that I am a “hard stick.” Do they listen or believe me? Of course not! They were all, “we do this every day, all day.” It seemed a nurse got one in but it didn’t work. It took an anesthesiologist about 45 minutes and an ultrasound machine to get the job done and I am back to looking like a domestic violence victim or heroin addict.

I am not looking for sympathy here when I write this, it helps me to get this out of my system, but I experienced something I never have before. Lying on the stretcher, with the medical people trying to get an IV in, I felt more scared and vulnerable than I ever had before. One nurse kept poking and prodding and saying, “If that doesn’t work, I’ll go here!”

No, no you won’t. They tried my foot (hurts a lot). They tried my hands (never happening again). The doctor who finally got the IV told me to never let the nursing staff try and to just ask for an ultrasound.

I am lucky. I have good insurance and access to decent care but that was scary.

I had a city adventure on Tuesday

Fresh off my EGD on Monday, I went into the city on Tuesday

But there’s good news! I have lots of comedy shows coming up!

Did you see this?

My birthday was a few weeks ago and there is still time to donate to my fundraiser for the International Campaign for the Rohingya. You can learn more about that here.