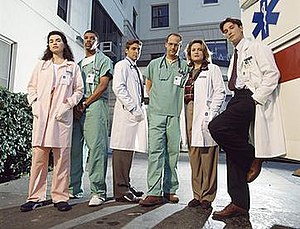 Original cast of the show (1994–1995) (Photo credit: Wikipedia). I have spent way more time in ERs over the past eight years than I would like and I have never seen any of these people there. Bastards!

My new least favorite sentence in the English language is “You need to get to the emergency room as soon as possible.”

It had been, “If you leave here, you will die.”  That one is what a hematologist told me one time during a “get to know you” appointment before she had even talked to me but saw what my vitals were and concluded I had orthostatic hypotension, caused by decreased blood volume.  I ended up getting multiple units of blood and iron infusions and clearly survived.

Of course, while I am thinking of things medical professionals should not say, “Wow, that’s fucked up.” makes the list, too.  A doctor looked at my palms and saw they look like Rand McNally.  In his defense, when I was doing the Georgetown pre-med program, I was treated differently than other times.  I have noticed three levels of treatment since my medical odyssey began in 2004.  As a pre-med student, I was a potential future colleague.  Doctors would actually listen — the same physician spent nearly 45 minutes convincing me WHY I needed a certain procedure — to me. When I worked on the Kerry/Edwards campaign, I was a VIP.  When I am just me, well, that sucks.

In any case, today’s dreaded phrase changed because I started having really bad chest pain yesterday.  That was troublesome so I called my doctor and his office told me to go to the ER.  I didn’t like that answer so I called another one.  Shampoo, rinse, repeat.  I hate the ER so I then tried to convince myself to go by thinking about what some of my friends would do in this situation.  When I didn’t like what I thought they would tell me, I went where most people go for real, reliable medical advice: the Twitterverse.  Is there really a better place to go for a real evaluation of health issues than random strangers on Twitter?  Of course not!  I should have started there.

What actually got me to come is that in 2006-07, I had two near death experiences due to the aforementioned anemia.  My blood level got so low that my heart stopped and I had to be resuscitated with the paddles.  Something that really hurts afterwards.  The first time, I was walking home from dinner and woke up at the George Washington University Hospital where I asked, What did you do to me?  To which they responded, We saved your life.  Ok, then.

So, as we are on the eve of the baseball season and I got to thinking this afternoon that the third time might actually be my third strike and I have too many cool things going on right now to go and die and miss them.  That’s a cool development for me because in the past self-preservation has not always come so naturally to me.  Like the time when I was mugged and I chased the guy down and caught him. How stupid is that?  Incredibly stupid.  The guy hit me, I think with my own fucking bag, and knocked me unconscious. I woke up in the middle of the street.  There was no thought process there, it was instinct.  And my instincts clearly suck ass.  So having any self-preservation instinct kick in, ever, is a very good thing.  A very, very, very good thing.  Yay, me!

The second piece of good news came at the hospital where my EKG was totally normal.  The only bad news is that I have to CT and they need a much bigger IV in me than will be possible unless they go with a central line or something and they suck.

While Sibley Hospital still won’t give me frequent flyer points, the staff here are great and this is the best ER in Washington, DC.

Hopefully, I will go home tonight.  Thanks for listening.