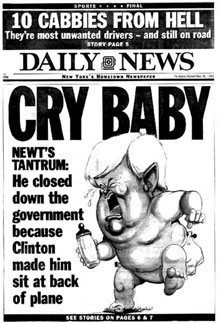 Newt Gingrich’s second 15 minutes seems to be coming to a close.  The self-proclaimed ‘ideas’ person who offered to debate Mitt Romney anytime, anywhere, seemed strangely out of place at tonight’s Florida debate. (My prediction about his candidacy can be found here.)   Newt’s problem has always been that he really believes his own press releases.  He doesn’t need to really prepare for debates or interviews because he is just that smart.  He is always going to be the smartest person in the room, except he really isn’t.  He also doesn’t seem to understand that while our attention spans are short, some of us remember what he was like when he had actual power.

Newt’s resurgence as the GOP frontrunner says more about how the party faithful feel about Mitt Romney than anything else.  Truthfully, I would welcome a Gingrich-Obama matchup because Newt just cannot help himself — his affinity for self destruction is legendary. He would have everyone believe that he is a Ronald Reagan clone who single handedly balanced the budget and is responsible for every GOP achievement since he was born.  Funny, I don’t think Speaker John Boehner feels the same way.

Oh, thanks for a giant fuck you to the residents of Washington, DC.  You want to send people to the moon and let them become a state but don’t want us to have a vote in Congress?  Nice, Newt, nice.