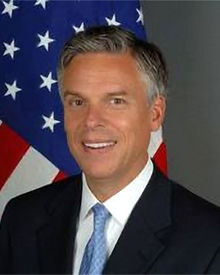 I am a liberal Democrat and always have been.  I want President Obama to win re-election.  So why on earth am I pulling for Jon Huntsman to win today in New Hampshire?  He has the best chance of beating the president.  And yet, here I am, hoping he pulls it out.  Intellectually, it makes so sense.

Even if Huntsman didn’t have the best chance of beating the president, I shouldn’t like him. He is really a conservative guy — ‘pro-life,’ supports the horrible Paul Ryan plan to dismantle Medicare, is all about the Second Amendment, you know, my type of person.  So what the hell am I thinking?

Running for president is serious business.  It’s a serious job.  I write political satire so the whole circus that has been the GOP presidential nomination process has been like a gift from God.  Come on, I was all about the Cain Train.  But as a citizen, the idea of a President Cain, Santorum, Gingrich or Bachmann scares the crap out of me. Whenever I want to bring up Ronald Reagan as a positive an angel loses its wings but one thing he had in his arsenal when negotiating with the Soviets was intelligence. (Oh, and hell just froze over a little bit.)  Can you imagine a Herman Cain in that kind of situation?  No?  That’s because we all probably wouldn’t be here now to think about it.

That is why I like Jon Huntsman.  I like that he is sane and reasonable.  I like that Pew called Utah the best run state in the country when he was governor.  And to me, it is a plus that he served in the Obama administration.  What happened to politics ending at the coasts?  When I travel overseas, I am am American first and a Democrat second.  That is what I like about Jon Huntsman.