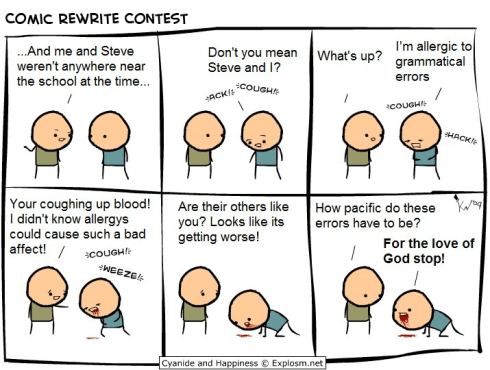 Few things in my life have more succinctly summed up my personality than this cartoon.  Several friends can attest to the stress I had before getting a tattoo on my shoulder recently, should there or should there not be a comma in there?  This debate took longer than picking the tattoo itself and ended up including the guy who ran the tattoo place, all of his employees and everyone who had the misfortune of walking in while I was there.  At least I was entertaining.

This got me thinking.  Why do I care so much about grammar?  I mean, when I was on that business trip to Albuquerque did I really have to boycott a perfectly good restaurant because “unless there is a woman there named Margarita and she’s having a personal special, I cannot walk in” ???  Couldn’t I have just asked them to change their sign? (Truthfully, this was several years ago and that option just occurred to me yesterday. D’Oh!)

I tell myself that poor grammar and punctuation habits mark a devolution in our ability to use our language skills and therefore will lead to an inability to communicate.  I will add that in an era when we need to communicate more rather than less if we are going to survive — the GOP does not have a monopoly on apocalyptic ideas — we need to pay closer attention to this.  You see, it’s not a mere pet peeve, it’s my concern for humanity.

Or I blame others.  I blame my sixth grade teacher for making us diagram sentences for weeks on end. (Side note: he was a mean bastard for sure but the rumor that he once threw me out a window is not true.)  I blame my college roommate, Marsha not Ali, who was a English major whose grammar was so bad it made me sick back then.  She asked me to correct her whenever she made a mistake and I like to think that started all this craziness.

The bottom line is that I will never know what sparked my obsession with apostrophe usage, action verbs and adverb hatred.

I will end with one last idea.  Dear US journalists:  When you add “ing” to a verb, it becomes a noun.  That’s called the gerund.  Unless you are writing a headline, stop doing this and use a goddamn verb.  Does everyone else feel better?  I know that I do.

4 thoughts on “Confessions of a grammar freak”