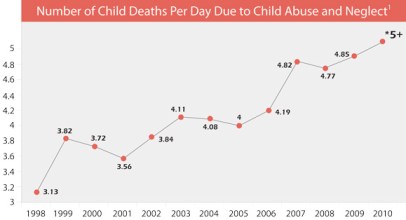 US child deaths per day timeline

Every ten seconds a case of child abuse is reported.  More than five children a day die of it.  Where is this gruesome place?  The United States.  We do like to tout ourselves at being exceptional, in this case we are.  The US has the highest rate of child abuse in the world.  That’s right, in the world.  You can listen to the BBC report on this here.

We don’t talk about child abuse, not when reports on it are released.  We only think about it when a high profile person such as a Penn State football coach in involved.  Or when we get to feel the collective anger at someone like Casey Anthony.  We fret and shout and wring our hands and say someone should have done something.  We never consider ourselves to be that someone because when we use that term, we really mean someone else.

Why is this?  We are not a war torn country, like Congo, where children are forced to be soldiers. 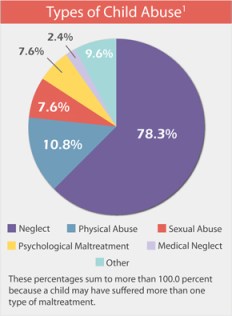 We have child labor laws so we aren’t forcing children to make our Nikes (at least not here).  When you compare the rates in the US to that in other developed countries, it becomes clear that the thing they have that we do not is a social safety net.  Hillary Clinton was ridiculed for her book It takes a village but it does.  We have a growing number of younger parents and provide little or no real support — 80 percent of childhood deaths due to abuse or neglect occur in children four or under.  Some of our leaders like to crow about ‘pulling ourselves up by our bootstraps.’  Where does that leave these children?  No where good.  Keep in mind, these statistics are low.  The cause of death for many kids who were the victims of abuse or neglect never makes it on to their death certificates.  Medscape article here.

The impacts of the epidemic are felt far and wide.  Abused children are more likely to abuse their children, go to jail or suffer a mental disorder or substance abuse problem.  More details here.

Remind me why the football program at Penn State is worth all of this?