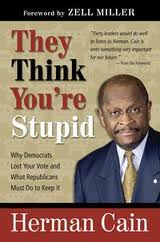 Herman Cain, aka the pizza magnate and current flavor of the month in the GOP POTUS candidate, has made some interesting choices and statements. He seems to think running for president and selling books are not mutually exclusive activities.

To give him his due, the Cain campaign has bought a lot of his books so he is definitely selling a ton while running for president. And Governor Sarah Palin would tell you her VP run and the speculation about her possible 2012 run did not hurt her book sales but just because you can do something, does not mean you should.

This is not an anti-capitalist view I am trying to promote. Sell as many books as want but it seems a little unseemly to use a presidential run to do it. Any presidential campaign is really a multi-month (or year) job interview for the most (or one of) important jobs in the country. Nothing a candidate does will really prepare anyone to be president (and it’s not supposed to, you should be qualified to run before you make that decision) but it does give the nation a chance to get to know the would be candidates. This is not a time to bring anything but your A game. When you think about that, is this really the time to split your energy between running and doing anything else?

Running for president is hard. Not has hard as being the leader of the free world but it is hard. That’s why I criticized Cenk Uygar when he said that Mike Huckabee was “too fat and happy” to run. I have a lot of respect for people who admit that it takes a lot of time and energy to run and there are no guarantees. Good for you, Governor.

Governor Rick Perry has learned how much harder it is to run for national office (I believe he thought that his track record in Texas would prepare him better for the presidential race) than any state-wide. That’s one of the reasons he has said he may not take part in upcoming debates (not that his underwhelming performances have had any role, seriously, if you cannot stay awake past 8:00 pm, how can you be president?).

Congresswomen Michele Bachmann has learned this, too. Maybe that’s why her New Hampshire staff all quit in a huff. Maybe she thought she could make up facts as she goes along in this campaign the way she does every other time she opens her mouth but it doesn’t seem to be working as well as she thought.

So we come back to the current front-runner (in national polls, though, not the state polls, where it matters more), Herman Cain. It is worth noting that the title of this post could also refer to Godfather’s pizza. With all due respect to Chicago deep dish pizza lovers, you can theoretically make pizza outside of New York, but why would you?

Full disclosure, which is pretty obvious to anyone who has met me or read what I write, I am a liberal Democrat and have every intention of voting for President Obama. Having said that, I think having two robust parties and a vigorous discussion about where we want the country to go, is in everyone’s best interest. I was really impressed when Governor Chris Christie said that he believes in “small government, lower taxes and less regulation,” not because I agree with ANY of that, in fact I do NOT, but that’s where our conversation should be.

Herman Cain is not advancing our political discourse at all. His economic plan (the “9/9/9” or “9/0/9”) would be disastrous. His ignorance of foreign policy is scary. It is his lack of interest in running for office, while he runs, that bothers me the most. With little or no campaign infrastructure, few details on his policy proposals and a general laissez-faire attitude towards the process, I am left with the thought that if he doesn’t care about his campaign, why should anyone?