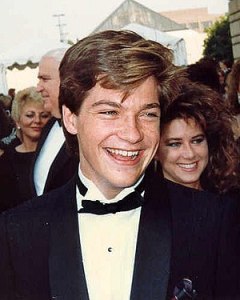 As people keep sending me “news” about a possible movie based on this show, I feel the need to share this.

One of the best television shows ever has to be Arrested Development.  Maybe it’s because I think I may have been born with a crush on Jason Bateman that I loved it so much.  Well, I came for the Jason Bateman and stayed because it was too funny to leave.

In 2004, I was in Los Angeles doing a trip for the Kerry campaign.  The hotel where we were staying was hosting the TV critics something or other where the networks trot out their stuff for the journalists.  My first thought upon hearing about this was I wonder if I will meet the cast of “Arrested Development.”

After I checked in, a friend and I went up to our room.  Tony Hale (Buster) was in the elevator. I was pretty sure it was him but not entirely so I didn’t say anything until we got off the elevator where I told my friend I think that was Buster …  she had no idea who I was talking about.  When we left, he was still in that same elevator — I kid you not.  I was all — that IS Buster…  to which my very not impressed and now slightly annoyed friend reminded me that she had no idea who he was.

The next morning was chaotic for me.  I had been off of coffee for at least six months but there was Starbucks in the room so I went for it.  I also got a call that a bunch of details that I figured I would have to do but was told I would not would have to be done by me.  It wasn’t a huge deal, it was just going to be a squeeze.  I mention all of this because I think it is important to get my state of mind at the time to set the scene.

So, I am waiting in front of the hotel for a colleague to pick me up (and they’re late, argh!) and my caffeine infused, stressed out brain is all over the place.  Then I look around and I am surrounded by the Arrested Development cast.  I might have noticed it sooner, had I been paying attention to something other than my growing to-do list.

They were all there.  That included Jason Bateman. Truthfully, I was concerned that I was too frenzied

to talk to him but how many chances do you get to meet someone you have had a crush on your whole life so I went for it.  I started by telling him that I had this crush for so long and that when I saw he was back on TV I was really happy and I loved the show.  He was SUPER nice.  We chatted for a decent amount of time during which he asked me about my thoughts on the show.  He was really concerned that the family as a whole and the individuals were not relatable.  I said I could relate to them.  He also told me about the then only British TV show The Office, which I started watching and loving immediately.  (Side note: if you like either of these shows, you really need to see The Increasingly Poor Decisions of Todd Margaret“ — David Cross and Wil Arnett, painful at times but glorious.)

I left that encounter with two goals for my year: to get John Kerry elected and to keep Arrested

Development on the air.  And I think history will back me up when I say I could not have failed more miserably at both (no, I do not think my impact on either was so great as to make a difference but it cracks me up that I was so determined and ended up just swimming against the current on both.)

Rumors keep floating about that they are making a movie and for a long time I woud get my hopes up only to have them crushed soon after.  Therefore I am not even going to entertain the idea that such a movie will be made until I see a preview for it.