It’s been a while.  Warning: it will be fraught with self indulgent crap.  As some of you 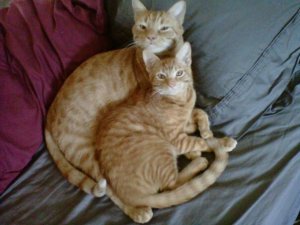 Cheddar and Hobbes in better times. When Cheddars died, he was about a year and a half old. Hobbes and I really miss him.

know, I was in the hospital recently.  I guess I was in  there about 11 days.  Three days before I went to ER, I had some sashimi from a place near my house.  Later that day, I thought it was food poisoning and that it would clear up on its own.  By the end of the week, I wasn’t getting any better so I went to the Sibley ER.  They put an IJ in my neck and admitted me.  Basically, any minor digestive problem has the ability to grow into something ridiculous.  I have been h0me over a week but eating is a challenge and I hate it.  So first, I feel crappy. Then I get some sympathy cards for Cheddar, who died in December.

I am going to nip this in the bud, stay in, watch Hotel Rwanda and cry my eyes out.  Maybe that will make me feel better.

I really miss you, Cheddar.  You were one of the best cats ever.

If anyone has advice about having a memorial for a cat, I have to have one.  Need suggestions, advice, whatever.